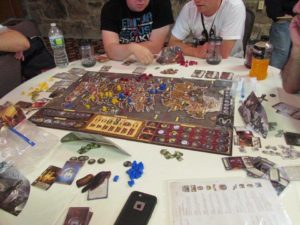 A true knight or lady of Westeros trains in both body and mind. So while our outdoor tourney includes sparring and some silly games, Ice & Fire Con also offers the ultimate mental test for series fans: The Game of Thrones Board Game tournament! In this exciting and highly detailed game, players take the role of one of Westeros’s great Houses and compete to win the Iron Throne. If you’re feeling aggressive, build armies and ships to attack your neighbors and gain their supplies and power. If you’d rather play the game of thrones with subtlety and poise, take a diplomatic route and form alliances for mutual protection. But be careful– whatever you do may come back to bite you, and the wildlings could attack at any moment. 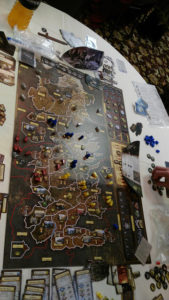 Ice & Fire Con offers two versions of the Game of Thrones Board Game: the Game of Thrones/Clash of Kings original version, and the Feast For Crows expansion. Both run by the same rules, but their goals and gameplay are slightly different. The original version can field up to six players (Houses Stark, Baratheon, Lannister, Greyjoy, Tyrell, and Martell) and the player who captures the most castles wins. This version is perfect for players who want to settle in for an adventure of ever-shifting alliances and long-term strategy. The expansion fields four players (Stark, Baratheon, Lannister, and Arryn), and the player who completes a certain number of quests first wins. This version, while still quite strategic, is quicker and simpler than the original. We decide which to play based on how many players there are and which version they’d prefer. Never played before? No worries! There are several experienced players who will be happy to teach you or partner-play with you.

If you are interested in participating in other Game of Thrones Board Game tournaments, please check out the following survey form created by one of our past tournament organizers.