The Faceless Man Game is a weekend-long Ice & Fire Con event that requires pre-convention sign up.

Goal of the Game:

Kill as many assassination targets as you can while staying alive and drawing the least attention to yourself.

If you would like to participate in the Faceless Man event, you must sign up prior to the convention via the link provided. You will be asked for the following:

Your confirmation email will be sent shortly after sign-ups close and will include a PDF file of all participants (their names, pictures, and costume list if applicable) as well as the name of your first target. Review your target and their known disguises carefully prior to the convention – you want to be familiar with their appearance!

We highly suggest keeping this file with you throughout Ice & Fire Con weekend, whether electronic or printed (or both); how you decide to carry it is up to you, but remember, parchment is precious and the rustling of it could very well give you away!

You will pick up your ‘stabbing weapon’ when you check in at Ice & Fire Con registration. Please plan on showing your confirmation email (either on your device or a printout) to the volunteers working the registration table in order to procure said weapon.

Once you have obtained your ‘stabbing weapon’, if you have any questions you should find this man: 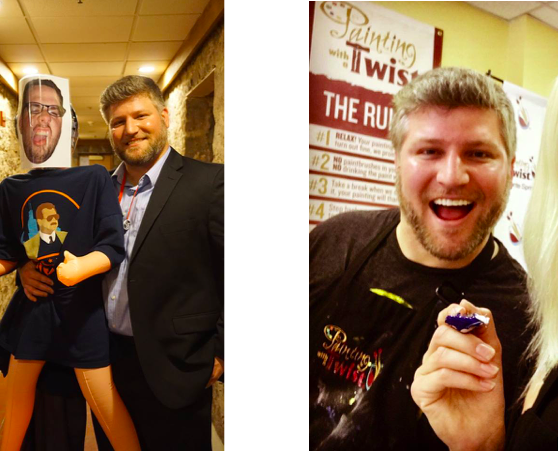 This man is called Brian Eidolon. This man can answer any Faceless Man-related questions that may come up during the weekend. However, you would be wise to speak with this man discreetly about such matters, lest bystanders in the vicinity overhear and realize that you are Faceless. The more people who know you are participating in the Faceless Man Assassin Game, the harder it will be for you to prevail.

If you succeed in killing your target, you will immediately acquire their target. You must register your kill and your new target by sending a text message to Brian Eidolon (phone number to be provided in further instructions) before proceeding to your new target.

(Example: You kill Jack. Jack then points out his next target on his – or your – participant dossier. His target was Jill, therefore, your target is now Jill.  You send a text message to Brian Eidolon stating “I, [Insert Your Name], have killed Jack. My target is now Jill”. You are now free to pursue Jill.)”

You are also free to defend yourself from assassination. Please see below for details.

The game continues until only one Faceless Man remains, or until 12 Noon on Sunday April 28, 2019.

Prizes will be distributed Sunday April 28th during the Ice & Fire Con Closing Ceremonies (scheduled to begin at 2 PM).

How to Defend Yourself

If you see someone approaching you with a Faceless Man’s stabbing weapon drawn, you have several options:

If you successfully kill the person who is trying to assassinate you, you don’t need to do anything else other than continue on your own mission.

Yes, this is important too.

If your assassin kills you:

Once you have been assassinated and your attacker makes themselves known to you by telling you “Valar Morghulis”, immediately reveal your current target’s information to them.

It is very important to keep a copy of the participant dossier on your person (or immediately available). If you are killed, you must be able to point out your target on the dossier to your killer without undue delay.  If for whatever reason you do not have your dossier with you, please help your killer identify who their next target is (whoever your target was).

If your target kills you:

Send a text message to Brian Eidolon (phone number to be provided in further instructions) and let him know that you’ve been killed by your target (“I, [Your Name], have been killed by my target, [Target’s Name]”).

NO MATTER HOW YOU DIE, BE HONORABLE. DO NOT LOUDLY ANNOUNCE OR INDICATE TO ANYONE ELSE THAT YOU HAVE BEEN KILLED, OR ESPECIALLY WHO KILLED YOU. THE HONOR OF THE HOUSE OF BLACK AND WHITE COMES BEFORE YOUR PRIDE.

(In other words, once someone kills you, don’t be a poor sport and tell other people who killed you or make it obvious that your assassin is playing the game until after the game has concluded. Let your assassin enjoy their win and keep vying for the ultimate victory.)

If they see you with a Faceless Man weapon, they may yell and alert others of your identity. Similarly, they may report you to the House of Black and White (Brian Eidolon). Do not run about like a common brigand making your intentions common knowledge. Plays keep they business on the down low. Conceal, don’t feel. A Faceless Man acts from the shadows.

Reports to the House of Back and White of your activities are undesired and will have negative consequences.